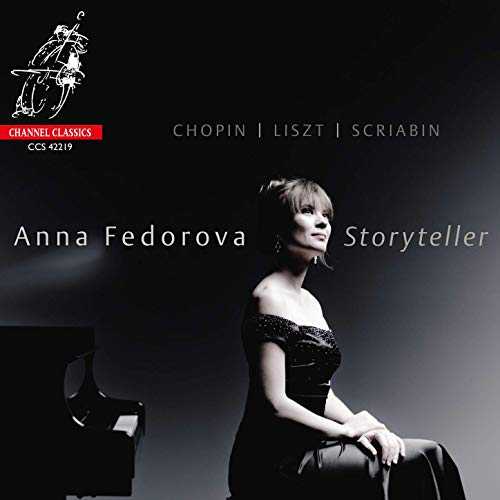 In earlier days these were the literary genres one could only encounter in folklore music. That is, until Chopin, Liszt and Scriabin introduced them in classical music! On my album ‘Storyteller’ I focus on these three composers – how they explored those poetic genres and how their compositions reflect the actual literary texts that inspired them.

The album starts with Frédéric Chopin’s four Ballades, which are among my most beloved pieces to perform. Apart from being incredibly beautiful and emotionally powerful, the ballades have a heroic narrative element as if telling the story of a medieval legend. They also have a distinctive dance element, possibly coming from the old Italian ballata. Each ballade holds its own unique world and unique story. Chopin was a pioneer of this genre, and he served as an inspiration for composers such as Liszt and Brahms, who (shortly after Chopin) wrote ballades of their own.

In his letters, Chopin often mentioned that the main inspiration for his ballades, were the ballades of a poet: the wonderful Adam Mickiewicz from Poland. There are ongoing isputes about which particular ballades by Mickiewicz inspired Chopin. Some say that Mickiewicz’s ‘Switezianka’, (Nymph of Lake Switez) was the inspiration for his third Ballade, while others say it inspired his second. In addition, there are theories that the novel in verse ‘Konrad Wallenrod’ was the inspiration for Chopin’s first Ballade. We cannot know for sure, but what is certain is that Adam Mickiewicz had a strong influence on Chopin. When reading his poems one can sense a resemblance to the musical style of Chopin’s compositions.

The ‘Tre Sonetti del Petrarca’ (Three Sonnets of Petrarch) by Franz Liszt belong to the second year of his Années de Pèlerinage (years of pilgrimage): Italie. These three poetic pieces were written after Petrarca’s sonnets numbers 47, 104 and 123. The pieces are very intimate and lyrical, and some of the climaxes even remind me of Italian opera! In all three sonnets Petrarca writes of his love for his beloved Laura.

Alexander Scriabin introduced the genre of poems as piano miniatures. For the closing of the album I chose two of his musical poems, Opus 32 and the Sonata no.4 Opus 30. Opus 32 are a couple of poetic sketches reflecting two states of the soul: one blissful and meditative, the other of all-consuming ecstasy! Scriabin found his unique way of expressing blissful contemplation and unstoppable, explosive creative energy. These are the two poles of his creative nature. In his Sonata No. 4, Scriabin provided a poem in prose that he himself wrote, flying towards a wish, a star, as his object of desire. It opens with a very serene, poetic first movement, which proceeds into a mad dance, liberation and flight of exaltation that ends with an absolutely ecstatic and overwhelming coda!

Apart from having a connection with literature, the title ‘Storyteller’ has a deeper meaning for me, since as a performing musician this is what one should do – tell the stories to the listeners with fingers and emotions. It’s just instead of words we are using music.